The Waterrower has recently been made famous by Kevin Spacy as the rowing machine used in the ‘House of Cards’. It is a type of wooden rowing machine produced and manufactured by Waterrower Inc. in New England, USA. The rowers were designed by ex-US national team rower john Duke in the mid 1980’s and the company to manufacture them was established in 1988.

Whilst these water rowing machines are not the cheapest on the market, they perform extremely well, are quiet, easy to store and beautiful to look at. When I last looked,  they started at around $1,160.00.

Most of the Waterrower range is made of wood harvested from the sustainably managed Appalachian forests of the eastern United States. The machines are extremely well built and are beautiful to look at coming in Ash, Oak or Cherry wood. If you are concerned about having an exercise machine in a living area, then one of the wooden models will fit right in to your living room. They are also extremely quiet in operation due to the wooden construction and the use of a strap rather that a chain. The only thing you can really hear is the swishing sound of the water in the tank as you pull giving you the feeling that you are really on the river!

The rowing machine itself is unlike any other on the market with its patented water filled flywheel. It is hard to exactly copy the action of a scull on the water, but the mechanics of the flywheel spinning in water comes in a close second on dry land. The fact that the water is 800 times denser than air means that there is no need for any extra resistance or dampening that you will find in normal air rowers. The faster you pull, the more resistance is generated giving it infinite variability. However, if you want to be able to practice rowing with a faster stroke, you will have to reduce the amount of water in the tank unlike an air rower where you just have to adjust the baffle.

There is virtually no delay in the resistance at the catch (the beginning of the pull), but the resistance drops off in the middle of the stroke as the water is lifted up away from the blades. This then drops down again as the end, which once again increases the resistance.

Storage is also a plus point for the Waterrower series as they are all designed to stand upright with the tank acting as ballast for stability. In this position they only take up around two square feet. Again, great if you are planning on training in the living room. However, if you have small children, I would advise fixing the top to the wall with a hook and strap.

The rail on which the seat rides on the Waterrower is flat, unlike the Concept2, which has a slight tilt towards the front. There is not much of a difference but it is better for people with chronic knee problems. The seat is fairly soft and comfortable and the handle is sturdy and gives a good grip.

One downside of the Waterrower for me are the footrests. Whilst they are perfectly adequate if you want to row in shoes, rowing barefoot, which is something I like to do, is impossible. The plastic is completely square at the bottom and has sharp edges that cut into your heels. I also found that my shoes get caught when trying to put them in and out of the holders, which is a bit irritating.

Another negative point for me is the angle of the seat. Unlike the Concept2, it has a slight backward angle, which makes it easier to maintain good form at the end of the stroke. Given that the Waterrower has greater resistance at the catch, it puts more pressure on the lower back at this point making it uncomfortable for people like myself with lumbar spine problems.

All in all, the Waterrower is an excellent rowing machine that will last a long time. It has a beautiful design and a smooth quiet action. It is easy to move and store, has a comfortable seat and solid handle. It is better for people with knee problems than the Concept2, but not so good for back problems.

The company is the only indoor rower manufacturer that uses water as a dampening mechanism and has a number of different models.

The Natural is made of ash and honey oak. These are very similar in colour and grain and both very hard wearing.

The Club has been designed for commercial use being made from stained ash with black rails to prevent scuffing in high traffic areas.

The A1 (Indo-Row) is a somewhat simplified version of the range. It has a monorail, a cut-down monitor and a maximum seat load of 275lbs. 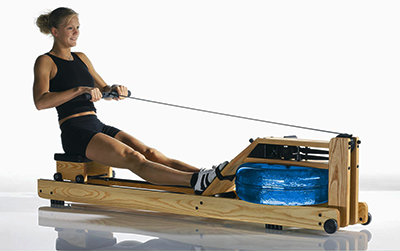 Article Name
Waterrower Review - Really how good is a water rowing machine?
Description
The Waterrower is unlike any other rowing machine available with its water filled flywheel. It has some advantages over air rowers, but it's not all good!
Author
Craig
Spread the love

My name is Craig Morgan and I am a sports physiologist, fitness trainer, teacher, rugby coach and dad to two wonderful boys. I have also been a rower for fifteen years and started this site to share my knowledge and hopefully help some people.