The Stamina Body Trac Glider 1050 is one of a large family of rowers and other fitness related products distributed by Stamina Products Inc. headquartered in Springfield, Missouri.

This rowing machine has a hydraulic cylinder to provide adjustable resistance. It has swinging arms rather than a fixed T-bar, is compact, lightweight, easy to store and at $139.00 is one of the cheapest non-chinese machines on the market.

Having trawled through over 100 Amazon reviews, I have attempted to summarise the pros and cons below. As you would expect with a cheap machine, you are going to have a number of issues which may put you off buying one, but you should consider what you want to spend, your size/weight and how much use it will get before you decide.

Kicking off with comfort, the main complaint here is that the seat is really hard, slippery and very low to the ground. Hard seats tend to be a general issue with many rowing machines models and this is pretty easily fixed with either a specialist seat pad or simply a piece of foam that you can pick up from the hardware store. This is also pretty good for preventing slipping and is something I often used to use in boats – the seats are rock hard! As far a the complaints about how low the seat is from the floor, I don’t think that this is really something you can miss from the photos of the product!

There is a bit of a mixed bag of reports about assembly ranging from fairly easy to horrendous. One thing that seemed to be common is that the instructions are not very clear. I had a look at some unboxing videos on YouTube and it doesn’t seem too hard, but if you buy one and do get stuck, have a look at this video where the guy explains it all pretty clearly. It shouldn’t take more than about 30 minutes.

Durability is the category of report that raised the most complaints and there seem to be a few weak points in the construction. There have been reports of the main frame breaking, the bushels on the oars breaking, bolts shearing etc. Not all of these were catastophic and people managed to fix many of the problems in pretty ingenious ways. Stamina’s support also seems to be pretty good and people have had replacement parts sent out promptly.

There is one issue which does seem to come up very regularly, is about the footrests which have been reported breaking more often than mere coincidence. There has been an update to the 1050, which is the Body Trac Glider 1052, where they seem to have addressed some of the issues people have complained about with the 1050 model.

One of the things people like a lot about this machine is the swinging arm motion which is much more like being on a real boat on the water. There are 12 levels of resistance from the single gas cylinder. Other praise is for the function of the seat slider which fits snugle and doesn’t wobble.

On the down-side, the resistance tends to drop off during the workout as heat builds up in the cylindar. If you are fairly big and strong, this will frustrate you if you are already on the highest setting.

As mentioned above, there have been a lot of complaints about the footrests. Apart from the breakage problem, the biggest issue is that they don’t hold your feet securely. Many customers have resorted to buying extra velcro straps and one added heel supports made out of plastic pipe! My all-time favourite is pictured right. This lady glued her flip-flops to the foot rests. She also added an elastic training band to increase resistance to give her leags a better workout. Brilliant!

For me, the monitor is an important part of a rowing machine, but you are going to get what you pay for. This one will track the number of strokes and the time, and the stroke count will roll over after 10,000 strokes. One guy considered this to be a problem, but would think that knowing the number of strokes in a given time during a workout is much more relvant than the total.

Anyway, a few people have complained that the monitor didn’t work correctly, but with the number of these units sold, it’s not surprising that a few will be faulty and Stamina are pretty good at replacing faulty parts.

The machine is has a fairly small footprint when folded and stored upright. It may be a little heavy and awkward to carry for some smaller women, but rowing machines don’t really come much smaller than this.

One issue is that the display is easily prone to damage when machine is stored vertically.

If the gas cylindar is working correctly, there should be very little noise. However, there have been quite a few complaints about the machine squeaking annoyingly. Proper maintenance with lubricant will probably fix many of these irritations but, it is a cheap machine, so build quality is not going to be quite Rolls Royce level!

Most people who have mentioned reaching out to Stamina about parts breaking have been very positive about the response. This is the advantage of buying an American product over the myriad of Chinese copies on Amazon.

The Stamina BodyTrac Glider 1050 is a fairly cheap rowing machine and you get what you pay for. It’s compact and easy to store, fairly straight forward to assemble even though the instructions are not so great. The seat is hard, slippy and uncomfortable, but that can be fixed with a foam pad. The footstraps do not hold your feet in well, but again, fairly easily fixed with extra velcro straps.

I think that if you are limited for space and on a bidget, this is a pretty good choice. 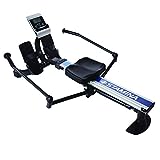