In terms of training value for time spent, there is little that comes close to rowing. It is a cardio, it is anaerobic and it is strengthening. By building rowing in to your CrossFit workout instead of running, you will be increasing the intensity and effectiveness of your training session several fold.

To understand why this is the case, it would be helpful to take a bit of a look at the body’s energy pathways and how they are used in a CrossFit training session.

An energy pathway, is the means by which the body delivers energy to the muscles, which can be converted into work by their contraction. Energy is released into the muscle fiber when a phosphate molecule is released from Adenosine Triphosphate (ATP) to form Adenosine Diphosphate (ADP). There is not a lot of ATP in the body (only about 250g), so it constantly needs to be recycled. An ATP molecule can be recycled between 500-750 times a day and it is estimated that one’s own body weight of the stuff will be broken down and recreated in a single day.

So, the processes by which ATP is recycled are what we are talking about when we refer to energy pathways. 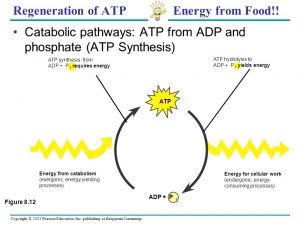 In order for the body to be able to reuse this chemical reaction, the phosphate molecule that was released to produce energy needs to be reattached to the ADP to form ATP again. This chemical process is done in two basic ways, with a third concerned only with energy release.

1) The Anaerobic System: As the name suggests, this is the chemical process that takes place in the absence of oxygen. “An” meaning without and “aero” meaning air. Most of us have hear of aerobic because of the type of training often offered in gyms. Many of us will also have heard of anaerobic training, particularly body builders and athletes.

Unfortunately, it is not quite that simple! We still have to split anaerobic respiration into two separate types: The ATP-PC System and the Glycolytic System.

1a) The Anaerobic ATP-PC System is at the opposite end of the scale to Aerobic respiration. It is responsible for short burst activity such as jumping up onto a box or swinging a kettle bell up to vertical. During the first few seconds of an activity, ATP supplies the energy. It is immediate and can last approximately 12 seconds. For a few seconds after that, the rapid decline of ATP is cushioned by phosphocreatine (PC) before the cell turns to another energy pathway, namely the glycolytic system.

1b) The Anaerobic Glycolytic System fills the gap between the ATP-PC and oxidative (aerobic) systems. The sugar glucose, which is obtained from dietary carbohydrates and is stored in the blood and liver, is broken down into ATP by the process of glycolysis. The by-product of glycolysis is pyruvic acid, which is converted into something most of us have heard of, namely lactic acid.

The process of glycolysis comes in two flavors – fast and slow. Essentially, the fast version can run for up to 30 seconds resulting in acid lactic acid accumulation, a drop in power and subsequent fatigue. Slow glycolysis doesn’t produce as much power, but extreme fatigue is avoided for longer. Here, the pyruvic acid is converted to acetyl coenzyme A, run through the oxidative Krebs cycle (see below), which produces more ATP, which delays fatigue.

For example, a 400m sprinter would come out of the blocks using the ATP-PC system and run most of the first bend on it. After that, ATP stored in the cells would run out and the fast glycolysis system would kick in. As the lactic acid starts to build up half way round the second bend, the runner grits his teeth whilst the cells desperately start reproducing ATP through slow glycolysis.

2) Aerobic (Oxidative) System is the lowest intensity and slowest process. Without getting too technical, it basically requires oxygen to break down glucose, fat or protein in the blood to form ATP. At its very core level, this is the system which operates when you sleep. As long as you have glucose, fat or protein available, it is virtually unlimited.

In terms of sport, the aerobic system will first use carbohydrates (glucose), which in a healthy adult is around 2500 KCal. Once this is depleted, which will happen during a marathon for example, the system will turn to fatty acids and then to eventually as a last resort to proteins.

One important technical term to note is the Krebs cycle, which is the chain of chemical reactions that continues to oxidize the glucose that was started during glycolysis. This process ends up by recreating ATP with a by-product of hydrogen, which is then converted to water by more chemical reactions and the electron transport chain. Phew!! So, bio-chemistry lesson over!

So what does this all mean in terms of CrossFit training?

The first thing to note is that through appropriate training, the anaerobic systems can be improved by 20% and the aerobic system by a massive 50%! Top rowing athletes spend a lot of time on the ergo training at a low level to improve their base aerobic systems. One would think that given the intensity of a race and the inhuman levels to which they push themselves, it would be best to train at a high output all the time.

The problem with this approach is that, as we have seen above, the glycolytic energy pathway is only good for around a minute at a push. Improving the efficiency of the Krebs cycle at oxidizing glucose into ATP is therefore essential for intense sports such as rowing the 2000m.

Essentially, the rowing machine will cover all these bases. Throughout your circuit, you can add in short 30 second intense bursts, which will push your glycolytic system to its limit throughout most muscle groups. At the end of each circuit, you could do a 10 minute aerobic cruise giving your oxidative system a good half hour in a three circuit session. Alternatively, you could build a fartlek interval training sub-session on the rower into each round keeping all three systems on the alert. The possibilities are endless.

The major advantage of rowing over other types of training is the “whole body” nature of it. CrossFit endeavors to cover all major muscle groups in a multiple of strength related and aerobic manners. Bringing a rowing machine into the circuit will enhance the intensity of both the strengthening aspects as well as the aerobic aspects of the session for almost the entire body. Also, by varying the speed and load of the machine, it is possible to activate all the energy pathways described above, giving you a more complete workout.